Foxy Russell Terrier, which also goes by the name Jack Russel, is out-going, mischievous, and Curious. These fun-loving dogs get their admirable traits from their parent breeds, both of which are well-known dogs. Foxy Russell Terrier is a hybrid that results from a mix of Fox Terrier and Jack Russel Terrier.

These dogs are small to medium in size, which means they will have almost no problem adjusting to an indoor apartment lifestyle. But you’ll have to keep a check on their daily activity levels, though, as they need a lot of that to stay healthy. Their coats can be a bit rough and harsh, which means extra work needs to be done to keep them looking decent. 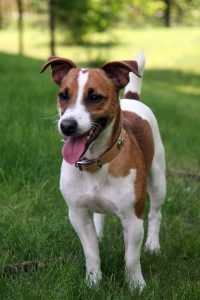 Foxy Russell Terrier is a comparatively new breed with not much going on the pages of their history. So, to gain a better perspective, we will look at their parent breeds. Fox Terriers are believed to have their origins in the 1500s England, where hunters used them for hunting medium-sized game like fox and Vermin.

The Jack Russell Terrier has the same origin Country as Fox Terrier; England. But they have a gap of around 300 years in their initial come up. These avid, swift, and energetic dogs were used by hunters on horsebacks as these Terriers were fast enough to keep up with them. They were named after John Russell, who was responsible for starting this breed in the 1800s.

Foxy Russell Terriers have a tough, compact, and solid build. Their bodies are usually proportionate, which means their length is proportionate to their height, giving a well-balanced image. They have moderately wide skulls at their ears that narrow down to the eyes and are a little flat between their ears. Your pup should have a strong, well-built, and powerful jaw with straight teeth.

They can have smooth or rough coats, and some even have a mixture of both, which is called a broken coat. But generally, all of the Jack Russells have quite dense double coats that are neither too silky nor too woolly. The possible coat colors include; White, black, brown, tan, and fawn.

How Big do Foxy Russell Terrier Get

The size of this dog can vary according to the breed of Fox Terrier used in the cross. But normally, the males have an average height of 11 – 14 inches and an average weight of 07– 15lbs. The females have similar proportions, their height may be a little less, averaging between 10 and 13 inches.

Small-sized dogs like the Foxy Russell Terrier have longer lifespans than the bigger and medium-sized dogs. On average, they live between 12 and 18 years. You can tip this scale towards the upper limit by taking good care of them, feeding them appropriately, and taking care of their activity needs.

How much does a Foxy Russell Terrier Cost

The price of any dog depends on various factors like the breeder’s reputation that you’re buying from. On average, they can cost you anywhere between $800 and $1200. You’ll have to spend extra on their accessories which include Toys, Beds, and Bowls.

Foxy Russell Terriers are energetic, loyal, and fearless. These dogs are work dogs at their core which were used to bolt foxes from their hoods during a hunt. This makes them highly intelligent and active. They can easily learn different games and good at them quickly. You can always rely on them to be ready for adventure and accompany you wherever you go.

They are usually good with children but keep in mind that they will not tolerate any kind of abuse, even if it is unintentional. So, ensure that you supervise them when children are around. And due to their social nature, they will behave well around other pets if they are socialized well early on.

Foxy Russell Terriers are small canines, but they have high energy levels, so you need to ensure that they are getting enough calories to keep up with their daily energy expenditure. On average, they do well on one to two cups of high-quality dog food every day.

How to Groom a Foxy Russell Terrier

These double-coated dogs with dense coats require bi-weekly brushing with a metallic or hard-bristled brush. This ensures that their coats remain free of mats and tangles. You may also have to take them to a professional groomer every three months and get them trimmed, especially from their face and legs.

Foxy Russell Terrier Terriers are hunting dogs, so naturally, they have a high need to work. To remain normal and healthy, your dog needs to exhaust its energy. You can accomplish this by taking them on walks or playing games with them. If you have an open yard, feel free to let them play around and exhaust themselves. On average, they will require at least 60 minutes of exercise daily.

As an intelligent breed, this swift little canine will get bored quickly if left alone. They need to be stimulated continuously, or else they’ll start acting dull and may develop behavioral issues. It would be best if you spend at least one hour with your best friend and let him know that they’re not alone.

Generally, Foxy Russell Terrier is considered one of the healthiest breeds around the globe. But certain Fox Terriers may develop health issues like eye disorders, Musculoskeletal Conditions, Patellar Luxation, Glaucoma, and Legg-Calve-Perthes Disease. 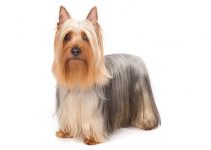 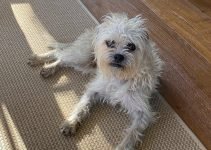 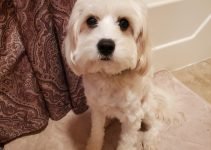 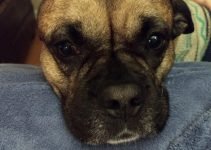 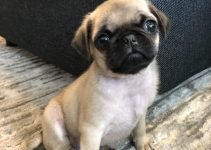