Home
Dog Articles
German Words to Train Dogs
This post contains affiliate links, and I will be compensated if you make a purchase after clicking on my links, at no cost to you. 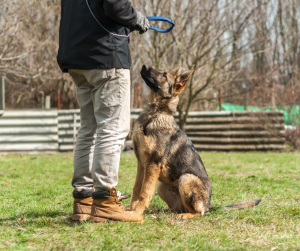 The German dog training commands will be broken down by dog owners to teach their dogs. These commands are entertaining to provide, and your dog will pick them up quickly. Training your dog in German commands is enjoyable, regardless of whether you have an old dog or a young puppy.

Based on their usefulness, brevity, and memory capacity, we created a list of German dog instructions with phonetic pronunciations. The American Kennel Club advises teaching your working dog these fundamental obedience commands or most common commands first; however, you may begin with a list of German dog commands:

Once your dog has mastered basic commands, you may introduce him to these additional fantastic German dog useful commands:

Don’t forget Good boy; Braver Hund (bra-ver who-nd) if they do a terrific job! In German, hund is a dog. And everyone ought to own a decent hound.

Note: You may not want to teach your dog to “steh” for stand-up if they have already learned English instructions since the word sounds too much like “stay” in English.

Seven Most Important Commands for a Dog

The following are the top seven dog training commands:

You may wish to take on more challenging commands and tricks after understanding the fundamentals of dog training sessions. The following is a list of the toughest dog training commands to teach:

Which is the Hardest Breed to Train?

If you own one of these dog breeds, you may want to consider whether teaching your dog German instructions is worthwhile if they have already mastered English commands. Go for it if your dog is still a puppy. In any case, they must master the fundamentals.

What are the German Dog Commands for Police Dogs?

Why does a Police Dog Know German?

There are three main breeds of police guard dogs:

The good idea that non-English instructions are used to prevent anybody other than the handler from ordering the dog to “attack” or “sit” is untrue, said K9 Officer Randy Widdicombe. In actuality, most police dogs—and German shepherds in particular—are imported from outside and taught using such cues. The officer would find it simpler to pick up a few German phrases than to teach the dog new commands.

German Word for Dog to Attack

Quiet Command for Dogs in German

The quiet dog command word in German is:

What Zook means in German?

The word “Zook” is pronounced similarly to “such” in German. Such as search or tracking tools. It is a typical command used in German dog training for K9 police dogs.

Why Do the Professional Dog Trainers Prefer German Training Commands?

There are several advantages to teaching your dog to react to German:

German is a Clear language for Dogs to understand

You’ll use the brief, recognizable, and simple to learn an imperative form of the term while issuing directions in German. It also helps that they might be entertaining to speak or shout. To see evidence, watch an Indiana Jones film!

If your dog has trouble understanding the English command, you might try teaching a certain action again.

You may retrain training dogs to do the required action using the German command if they have become unresponsive to an English command. Because the German term has no prior connections, your dog won’t mistake it for the English command. This allows you to instruct your dog on the right behavior.

German dog orders are entertaining to speak, and the fact that your dog understands and obeys them might be impressive to your best friends. It makes for a wonderful conversation starter and a useful party trick.

Does a Dog Respond Better to German?

German is not always more effective with dogs than English, popular languages, or different languages. More specifically, it depends on how effectively you’ve taught your protection dog. However, German orders are brief and simple and include attention-grabbing harsh consonants, making it simple for your dog to recognize that you are speaking to them.

German dog commands should be used while teaching your dog, and you should:

Your dog’s ability to learn the instructions will likely depend on age. If your dog is older and already familiar with the fundamentals of English training, you could choose to pick other commands to teach them or police work or protection with them to switch to German.

Best Age to Train a Dog

Due to their blank slate, puppies are the ideal age to teach advanced obedience work. But pups in their early stages have relatively limited dog attention spans. Your dog should be trained when it is about 7-8 weeks old. They are mature enough to obey simple instructions at this age, but their behavioral patterns have not yet developed.

Can a Dog Learn Commands in Two Languages?

Although dogs are not naturally bilingual, you may teach them commands in any native language, even two or more. Dog schools use visual cues to start teaching dogs. They begin by instructing them using visual clues before switching to oral instructions.

Using Treats can be Effective in Dog Training.

Food is a powerful motivator for dogs. For this reason, many trainers employ dog treats to bribe their charges into following directions. Small dog treats enable many attempts before the dog loses interest. You’ll most likely be the one to cut them off.

Keep the treat a secret to prevent it from becoming a bribe rather than a reward. In this manner, the dog won’t anticipate the reward before responding to the order.

Additionally, you should use caution while selecting your sweets. Many dog treats are heavy in calories or, if your dog consumes too many while being trained, might cause digestive problems. To encourage your dog, it’s crucial to choose training treats that are little and scented.

German dog instructions are a wonderfully great way to teach your dog since they make it simple for your dog to tell the difference between a command and a conversation. Using German for teaching a puppy will be simple, and you’ll discover that you can have your dog responding to German very soon.

Start When Your Dog is a Young Puppy

Due to the lack of connections while training a puppy, educating them in German will be the same as teaching them in English. Remember to be patient while you present the necessary instruction using the German language.

Don’t give up hope if you wish to train your ancient dog to obey German instructions. Your aged dog can learn if you give him plenty of repetition, love, and patience. You’ll be able to wow your pals with your bilingual dog after it learns its new instructions.