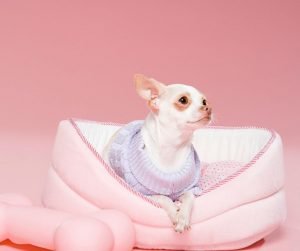 Chihuahuas are a beloved, small breed known for their sassy personalities and are one of the most popular breeds of dogs in the United States. If you’re a Chihuahua owner or are considering adopting one, you may be wondering how long they stay in heat. Understanding the length of a Chihuahua’s heat cycle is important so that you can prepare accordingly and know when to expect your pup to reach sexual maturity. Let’s take a closer look at what happens during a Chihuahua heat cycle and how long it typically lasts.

What is a Heat Cycle?

The heat cycle of unspayed female dogs is also known as estrus or season. It is the time when she is ready to mate with a male dog, and it occurs twice per year or every six months. During this time, her hormone levels are elevated, and she begins to exhibit behavioral changes due to her biological desire to reproduce. These mood swings caused by the estrus cycle can include restlessness, increased vocalization, and even aggression toward other dogs.

What Happens During Heat?

A Chihuahua’s first heat cycle begins when she reaches sexual maturity. This usually occurs between 5 and 10 months of age but can occur as early as 4 months old in some puppies. During this time, female Chihuahuas will experience physical changes such as increased or bloody vaginal discharge (which may have an unpleasant odor), swelling of the vulva, tenderness in the mammary glands, and an increase in urination to attract males. She may also experience hormonal changes and become more anxious and vocal than usual during her heat cycle when estrogen levels are higher than normal.

In addition to physical signs like swollen vulva and bloody discharge, there are other signs that indicate when your pup is in heat. Female Chihuahuas often become more affectionate during their heat cycle, as well as more clingy and needy than usual. They may also become more vocal than usual or display other signs, such as panting or pacing restlessly around the house. It’s important to keep an eye out for these signs so that you can provide your pup with the additional care they need while they are in their heat cycle.

How To Care For A Chihuahua In Heat

The best way to care for a Chihuahua in heat (regardless if it’s the first time or not) is to keep her away from male dogs during this time, especially intact male dogs. Make sure she has access to plenty of fresh water and take extra care when walking her outside; she may attract the unwanted attention of male dogs due to her scent! It is also important to keep her calm during this time; too much exercise can put her at risk of becoming overheated or exhausted, so try to limit strenuous activities until after her heat has ended. Additionally, ensure she gets plenty of rest, as this will help reduce any stress or anxiety she may be feeling. Pet parents can also keep their small dogs in a crate or kennel with doggy diapers to prevent blood or discharge from getting onto the floor.

How Long Does it Last?

The average length of a female Chihuahua’s heat cycle is about 3 weeks. It can last anywhere from 2-4 weeks, depending on the individual dog’s age, health, and hormone levels. Generally speaking, younger dogs tend to experience shorter cycles, while older dogs tend to have longer cycles. The first half of the cycle is called “proestrus,” while the second half is called “estrus.” During proestrus (the first half), your pup will not be receptive to males yet; however, during estrus (the second half) she will be ready to mate with male dogs who are also in heat.

It’s important to note that female Chihuahuas can still get pregnant even if they haven’t gone into full estrus yet—so if there are unaltered male dogs in your vicinity during your pup’s heat cycle, be sure to keep her away from them at all times! Additionally, it’s always best practice to spay or neuter your dog regardless of whether or not she is in heat; this greatly reduces her risk for certain cancers later in life and helps prevent unwanted puppies from being born into already crowded shelters.

During each stage of her heat cycle, make sure you keep a close eye on your pup’s behavior and monitor any changes that occur—especially if she has been mated with a male dog during proestrus or estrus phases. It’s important to pay attention because there are certain risks associated with breeding female Chihuahuas in heat (e.g., bacterial infections, uterine infections). Additionally, it’s essential that you keep your pup away from unneutered males during these times so she doesn’t get pregnant! An easy way to keep your female dog safe is to keep an eye on her in a fenced-in yard so you know no other dogs can get to her.

Factors That Influence the Duration of Heat Cycles

Several factors can influence the length and intensity of a heat cycle in Chihuahuas. These include age, health conditions, seasons, and stress levels. Generally speaking, younger dogs and smaller breeds tend to have shorter heat or reproductive cycles than older dogs and larger breeds because their hormones are not as well regulated yet. Additionally, if your dog has any underlying health problems, such as obesity or thyroid problems, these could cause their standing heat to last longer than normal. Finally, stress levels can also have an impact on heat cycles. If your dog is feeling particularly anxious or nervous during her heat cycle, it could extend its duration by several days or even weeks.

Understanding how long chihuahuas stay in heat is critical for all chihuahua owners and prospective owners alike! A typical female chihuahua’s heat cycle lasts around three weeks – two weeks during the proestrus stage and one week during the estrus phase – though this may vary depending on age and other factors like health or hormone levels. To ensure the safety of your pup (and other potential pups!), keep her away from any unaltered males throughout her entire heat cycle – even if she hasn’t gone into full estrus yet – and consider spaying or neutering her for additional protection against certain cancers later in life. With the right knowledge about chihuahuas’ heats cycles under your belt, you’ll be well prepared to keep your furry friend safe until she reaches sexual maturity!