Home
Dog Articles
Husker Dog Breed Information – All You Need To Know
This post contains affiliate links, and I will be compensated if you make a purchase after clicking on my links, at no cost to you.

The Husker is considered one of the most amazing breeds due to both of its parents. If you don’t know what we are talking about, then you will understand soon enough. The parents of the Husker are the Siberian Husky and the Boxer. If you aren’t amazed by this combination, then you probably don’t know much about both of these breeds. 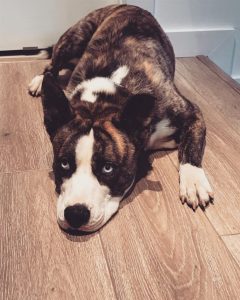 Unfortunately, we don’t have a lot of info about the exact origins of the Husker. However, we can analyze the history of the Husker’s parents to understand the Husker better. The Siberian Husky can be classified as an ancient breed. The earliest records of this breed can be traced to the Chukchi tribe. They developed this breed. The main purpose of the Siberian Husky was a means of commute, food, and protection. During the Stalin regime, this breed suffered a lot. Fortunately, a few kind people saved it.

The Boxer is another amazing breed with a slightly indecipherable history. The Boxer is related to the ancient Mastiffs and Molosser Dogs, according to experts. It became entirely popular during the 18th Century. During the 18th Century, it was used for bloody activities like Bull-baiting. Fortunately, in 1835, all of the violence associated with dogs was outlawed. Afterward, the Boxer became tamer. The AKC officially recognized the Boxer in 1904.

There aren’t a lot of the Husker’s available. For this reason, we can’t say for sure what they will look like. Yet from the few documented cases, we have understood that their general appearance is similar to the Boxer. They will have a strongly muscled body with long legs. They will also sport the same firm jaw shape. The eyes of the Husker will be almond-shaped and either Blue or Brown. The coat will usually be medium length.

How Big do Husker Get

The Husker will usually be a medium to small-sized breed due to the diversity of its parents. You should expect the Husker to have a height between 18 and 25 inches. The weight will usually be between 35 to 71 lbs. The proportions of this amazing breed should be kept in close control. Even though the ranges are quite spread, we would recommend not letting the weight exceed that range.

How Long Does Husker Live

The Husker is a modern breed with no real data to back up its standards. The lifespan that we can give you is based entirely on speculation. We believe that the Husker will live a standard life of 10 to 15 years. The actual figure may differ by one year. The diet and exercise that you give it will also change the lifespan of this breed.

How Much Does a Husker Cost

Again as stated above, the Husker is a rare breed with no recognition. Therefore, we cannot put an accurate figure for a Husker puppy. However, it does have parents that are quite demanded. If we base a figure on that fact, the Husker will typically cost you about 600 to 1200 dollars. The price will vary based on your area and the health of your buddy. Play safe and sanely is what we will recommend.

Both parents of the Husker are super people-friendly. Accordingly, it wouldn’t make sense for the Husker to be aggressive or malicious. The Husker will love being around people. If you are getting the Husker to your guard dog, then please do. The Husker becomes good friends with almost anyone, but it will still protect its human with the utmost tenacity.

The Husker will most likely become best friends with children in the house. The reason for that is because they oscillate on the same strings. Training the Husker won’t be that hard. However, it will most likely lead to numerous problems if you don’t have the experience to deal with it. To give it the best training experience and learn how things work, get a Dog Training Book. We kid you not; it could save you a lot of trouble.

The Husker, like most breeds, requires the attention of its owner to maintain its beauty and health. What should you do? The answer to that question lies in the next few paragraphs, so please pay attention.

Defining a single dietary plan for the Husker will be hard because of its size range. Yes, we can say for sure that the volume shouldn’t exceed three cups. You may use a healthy combination of food like Iams Dog Food and Pedigree Dog Food. We recommend giving the Dog Food section a look if you are not satisfied with the previous choices.

How to Groom a Husker

The Husker has a coat that usually sheds a lot. If you don’t want fur everywhere around the house, you will have to brush it daily. You may use a Deshedder or a Dog Brush of your liking to finish the task. It would be best if you also brushed its teeth every other day to keep its gums healthy. The Husker will also need its nails to be trimmed every two to three weeks. Finally, you should be ready to bathe the Husker after about one month.

The Husker is considered a highly active breed in its category. You will have to give it between 60 and 80 minutes of exercise daily. You are advised to keep it close to you while taking it out. It tends to wander around. You should also break down the exercise sessions into smaller parts to make things more efficient.

The Husker is one breed that doesn’t need much care at all. However, there are some general guidelines and warnings that you should follow. First of all, the Husker may not be hypoallergenic. It means that people with allergies will have a hard time coping with the Husker. It would be best if you also learned that the ears of the Husker need frequent cleaning. If you don’t clean its ears, the Husker will develop nasty infections.

The Husker is a hybrid. The word hybrid attached to a dog breed means a higher likelihood of inheriting serious conditions. The Husker, fortunately, does remain relatively healthy. However, certain conditions like Gastric Torsion, Entropion, and Corneal Dystrophy will affect the Husker. There is also an increased risk of the Husker developing cancer.

Yes, you should be worried. But, instead of developing fear and unnecessary anxiety, learn to channel that fear into your actions. First of all, understand that the Husker needs to be checked in with a doctor every week. Therefore, you have to ensure consistency in its check-ups. It would also help if you paid attention to what it ate.

The best dog food for the Husker is Blue Buffalo Life Protection Formula Adult Chicken & Brown Rice Recipe Dry Dog Food. This product is different from other dog foods as it is completely natural. It contains high-quality protein to help develop strong muscles and provide them with a balanced diet. 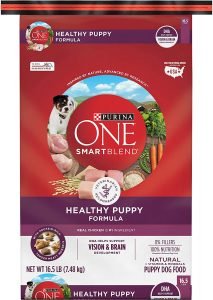 The best puppy food for the Husker is Purina ONE SmartBlend Healthy Puppy Formula Dry Dog Food. This product contains high-quality real chicken that helps to grow strong muscles. It has a combination of all essential vitamins, minerals, and antioxidants which provide a proper diet and promote health.

The best dog crate for the Husker is Paws & Pals Oxgord Double Door Collapsible Wire Dog Crate. This product comes in many sizes that you can choose from also available with a one-month limited warranty. The crate is really easy to clean as you require cool water, mild and non-toxic detergents to wash it.

The best dog bed for the Husker is Best Friends by Sheri Calming Lux Fur Donut Cuddler Bolster Cat & Dog Bed. This product is very comfortable and provides the Husker with maximum luxury. The bed is round in shape and very soft, which allows them to curl up inside it.

The best dog harness for the Husker is Puppia Black Trim Polyester Back Clip Dog Harness. This product comes in various modern colors. The harness is made out of high-quality polyester, which is very soft on the skin and does not cause infection or irritation. 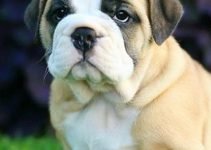 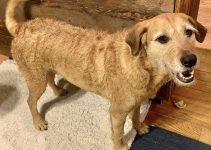 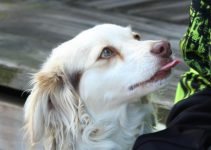 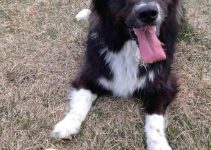 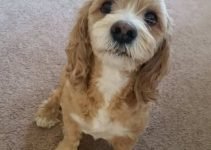 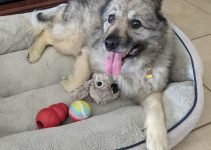