Chow Pit is a unique hybrid of a bigger dog American Pitbull Terrier while a smaller dog Chow Chow. The resultant hybrid is medium in size, having a sturdy body, medium coat, massive head, and expressive eyes. He can be playful and comical, although he is also the guardian and protector of his family.

He is a lot of canines that must have an owner who can rein him in and take an active role in training. We will share its history, traits, grooming needs, diets, exercise regimens, and much more in this article.

The Pit Bullmastiff history is hard to find, especially who started the breed and when. So, let’s look at its parental background. The American Pit Bull Terrier started as a result of breeding between bulldogs and terriers in the 1800s. The aim was to create a relatively smaller breed than other massive breeds, which best performs pit fighting. It was primarily used for bear-baiting, pit fighting, etc., but after these sports were outlawed in 1835, the dog became famous as a guard and companion.

In sharp contrast, the Chow Chow originated from northern China and was not given this name until he arrived in England in the 18th century. It is an ancient dog breed known for its dense double coat that is either smooth or rough. These dogs were used to guard temples and also for hunting, scenting, and pointing. Due to his prowess in these fields, he gained immense popularity within a short time. However, until 1906, the American Kennel Club registered it officially as a breed.

The Pitchow is a medium-sized dog; however, he can be small or large depending on which parent genes he favored more. The body structure will likely be sturdy, and the coat can either be single or double. Typically, he has a medium lengthen coat, massive heads, and an athletic build. Eyes are typically black, large, and expressive, and the ears are slightly drop down. Whatever parent their genetics favor, the Pitchow is an adorable dog with a load of character and personality.

How Big to Pitchow Get

Pitchow could stand anywhere from 17-21 inches tall and weigh 30-70 pounds when fully matured. A dog’s weight in maturity will depend on its sex, as females tend to be smaller.

How Long Does Pitchow Live

Considering that Pitchow has been around only for the last few years, there’s not enough information about his lifespan.  However, it may live for 12 to 16 years as an average dog does. It is, however, not a fixed estimate, and you may increase it with good care.

How Much Does a Pitchow Cost

Pitchow can cost anywhere between $100-$1500 or more. If you are thinking of getting one of these pups, do your research on the breeder before buying. It ensures that he is a reputable, responsible, and ethical breeder who delivers healthy puppies.

Pitchow couldn’t be much more different from his parents. His American Pitbull Terrier parent is intelligent, strong, and in-your-face sociable. In contrast, his Chow Chow parent is sweet, gentle, and friendly. That’s the reason this hybrid is becoming so popular among dog owners.

You need to train and socialize them in their puppyhood as they can easily knock a small child to the floor even as a puppy, but as he matures, he becomes more quiet and sedate. He may also be very easy to housebreak and needs a firm hand in regards to discipline. It doesn’t mean to use harsh techniques for training; rather, a firm and consistent approach and treats and motivation will give the desired pup.

Keep an eye on Pitchow’s weight as he may be prone to obesity and care for its needs. Talk to the vet if there are any concerns around weight gain or any other health issues. Carefully read to know the key points of this hybrid’s care.

The size and energy of Pitchow take a lot of sustenance, so expect to spend quite a bit on his food. Three cups of good-quality Dog Food split into frequent meals could go well with this breed. Some larger Pitchows could eat more, but the best thing is to take veterinary recommendations on your dog’s diet.

How to Groom a Pitchow

This mixed dog should be brushed with a Dog Brush couples a week to minimize tangles and matting. It would help if you bathed Pitchow with mild Dog Shampoo once in a while but not too often, or it will dry out his skin.

Pitchow is neither hyperactive and nor a laid-back canine; rather, he fits in the medium category. He is quite satisfied with just 45 minutes or so of activity per day. This crossbreed is much more comfortable in a house with a yard or spacious enough to have its Dog House and Dog Playpen where he can rest and play freely.

This fun-loving family member will love walks and jogs with added playtime in the canine park or the fenced back yard. These play and outing sessions have many advantages. First, it keeps your dog active, away from bad behaviors. Second, it gives him physical and mental stimulation and a good chance to socialize.

When it comes to maintenance, pay special attention to your Pitchow’s ears and clean with Dog Ear Cleaners. It is vital to keep the pup dry and clean otherwise; you can risk infection.

Pitchow is a healthier hybrid, but some concerns could be more likely to arise because his parents are more prone to them. These health concerns include Entropion, Hip Dysplasia, Gastric Dilation Volvulus, Ear Infections, and Cataracts. Fortunately, these issues are treatable or manageable, but ensuring a regular vet visit is good to maintain your dog’s health. 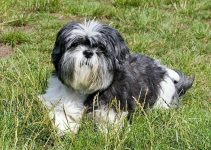 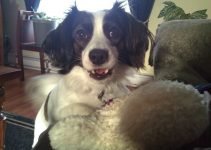 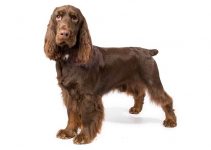 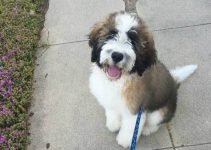 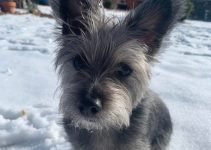