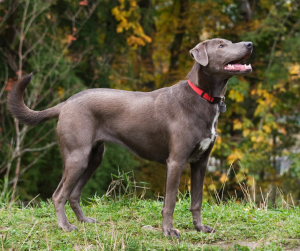 Have you ever wondered what the official state dog breed of Texas is? Who knew the lone star state would have a state dog? Well, wonder no more! The answer is the Blue Lacy. This hardworking, loyal, medium-sized dog has been associated with the state of Texas for over 150 years. Let’s learn more about this special canine and the essential role it plays.

The American Blue Lacy Dog is the official State Dog of Texas, having been designated as such by House Concurrent Resolution No. 101 on June 17, 2005. Developed in the mid-1800s (mid-19th century) by the Lacy brothers, this breed was originally bred to be an all-around working dog. They were bred to help with ranch operations in the texas hill country. Texas ranches are where this herding dog tends to thrive. The Lacy Family used their dogs for herding livestock and hunting game; they were also known to serve as couriers and trackers. A scent hound that could keep free-roaming hogs and wild boar at bay is what made this intelligent dog a true Texas breed.

The American Blue Lacy breed is a medium-sized breed with a lean but muscular build and short coat ranging from dark charcoal to fawn in color. Dogs of this breed have high energy levels and require plenty of exercise and mental stimulation daily to keep them happy and healthy. They’re intelligent dogs who love to learn new tricks and can easily adapt to almost any living situation or lifestyle. Their sleek coat and blue-color gene are where their name blue lacy comes from.

American Blue Lacy Dogs are loyal companions who bond strongly with their owners, making them excellent family pets. These top dogs tend to get along well with other animals if properly socialized from an early age and with positive reinforcement. They make great playmates for children due to their high energy levels and affectionate natures. They are great family dogs with an incredible drive and proud heritage. That being said, they do need firm training from an experienced owner to help them understand boundaries and proper behavior around people and other animals alike.

History of the Blue Lacy

The Blue Lacy was developed in Texas by Frank, George, and Ewin Lacy in the late 1800s. It is believed that they were bred from a mix of Greyhound, Coonhound, and Wolfdog breeds. Originally used as hunting and herding dogs on their family farm, they quickly gained popularity amongst ranchers and farmers throughout the state due to their intelligence and athleticism. They became known as “the working man’s best friend” for their ability to work tirelessly for long hours without rest.

In 2005, the blue lacy was officially recognized as the official state dog of Texas by then-governor Rick Perry. This recognition was largely due to the efforts of schoolchildren from Burnet County, who wrote letters to Governor Perry advocating for this designation. The students cited the breed’s intelligence, loyalty, and courage as reasons why it should be honored this way.

In addition to being recognized as the state dog of Texas, blue lacys have been inducted into several other canine registries over the years, including United Kennel Club (UKC) and American Kennel Club (AKC). However, they remain relatively rare outside their home state due to limited breeding populations and geographic isolation.

Traits of a Blue Lacy

Blue Lacys are an intelligent breed that is incredibly loyal to their owners. They have an independent spirit but will form strong bonds with their people. They are also highly active dogs that require lots of exercise; they love chasing after balls or running around outdoors but should be kept on a leash when out in public due to their instinctive prey drives towards smaller animals like cats or rabbits. They make excellent guard dogs due to their alertness and protective nature, but they can also be friendly and welcoming companions when adequately socialized with other people or animals.

Blue Lacys are strong, athletic dogs with short coats that range from blue-gray to red-brown, depending on their age and activity level. They have dark eyes, long muzzles, webbed toes that make them good swimmers, and long tails that help them keep their balance when running or turning quickly. Male Lacys typically stand between 17-21 inches tall, while females are slightly smaller at 16-20 inches tall. They usually weigh anywhere from 25-50 pounds, depending on how much they eat and how active they are.

Lacys are loyal, intelligent dogs who thrive on human companionship. They love being part of a family and do their best when given plenty of structure and activities like agility training or long walks/runs with their owners. They also need plenty of mental stimulation; if left alone too often or without enough physical exercise, they may become destructive due to boredom or separation anxiety.

The Blue Lacy is an incredible breed with deep roots in Texas history (making it a Texas native). Its intelligence, loyalty, and athleticism make it an ideal companion for anyone looking for an active outdoor companion that loves playing fetch or going on long hikes through nature trails! Whether you live in Texas or not, if you’re looking for a furry friend who loves adventure just as much as cuddles, consider bringing home your own lovable Blue Lacy! You won’t be disappointed with these versatile dogs and this unique breed.