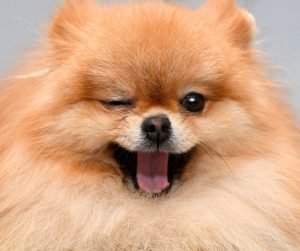 All dog owners know that their furry four-legged friends can express a range of emotions, from joy to sadness. But one expression has puzzled many pet parents – why do dogs wink? What is the meaning behind dog winks? Are our furry friends trying to tell us something? Let’s explore the mystery of the dog wink and how to interpret it.

The Science Behind Winking

Dogs have evolved from ancient wolves, so a possible reason is some subtle behaviors remain from their wilder days. One of these behaviors is winking, which was used by wolves for communication within the pack. When one wolf wanted to show submission to another, he would perform a submissive bow or lower his head and close one eye briefly in order to let the dominant wolf know that he was not a threat. This will often be done as a sign of respect and to communicate any good intentions. Animals often use social cues and physical gestures to communicate. That is why eye contact and dog stares can be seen as a sign of aggression in both younger dogs and adult dogs and should be used with caution when conducting behavioral shaping training with your canine friends.

In addition to exhibiting submissive behavior or mimicking humans, dogs may also be winking in response to external stimuli such as bright lights or sudden movements. This type of reflexive behavior is known as an ocular reflex and can be seen in other animals (such as horses) as well as humans. It is important for dogs to have this reflex in order to protect their eyes from potential harm or irritation. Plus, it makes them look even cuter!

Today, dogs will often use this same behavior when interacting with humans. By winking at us, they are communicating submission and showing that they trust us and recognize us as part of their “pack.” Dogs may also be trying to imitate human behavior; humans often wink when they want to communicate something special or intimate between two people. So, if you notice your pup winking at you, it could be because they think they’re just like us!

It’s important to note that there is a difference between dog winking and eyelid twitching. While both behaviors can be cute and endearing, the underlying meanings are quite different. When dogs wink, they typically do so slowly and deliberately with their eyes closed for several seconds at a time. This is distinct from eyelid twitching which tends to be much quicker and more sporadic in nature. If your pup is twitching its eyes rather than winking, chances are good that they’re simply responding to some external stimulus, such as hearing a loud noise or being startled by something in the environment. Excessive winking can also be one of many health issues that may look like regular dog blinks; however, there may be a health condition or genetic condition that may result in eye problems or eye issues. The next time you notice this type of new behavior, be sure to consult with your veterinary. Your dog may be experiencing dry eyes, irritation to its tear ducts, or another type of health problem.

The Meaning Behind the Wink

The meaning behind a dog’s wink is often debated amongst canine enthusiasts. Some believe that a wink is a sign of affection and trust, while others think it’s just another way for your pup to communicate with you. Others believe it is a sign of submission, a sign of dominance, or a sign of aggression. It’s important to remember that every dog is different and will have their own unique communication style. So, why do some dogs wink more than others? This could be due to breed, training, environment, or even age. In addition, certain breeds are known for being more expressive than others – think of clever poodles or sweet Labradors!

On the other hand, if your pup winks while showing signs of agitation, such as growling or stiff body language, then it could be a sign that he’s feeling threatened or uncomfortable in some way. This type of winking could also be interpreted as an attempt to defuse the situation before things escalate into something bigger – like a full-on fight between two pups! It’s important to remember that all behavior needs to be interpreted within the context of the situation, so keep an eye out for any accompanying body language that may clue you into what’s really going on with your pup.

It’s also important to understand your pup’s body language in order to best interpret what they are trying to tell you. While winking may be an indicator of your pup’s inner thoughts, other behaviors, such as licking or barking, can also help you better understand what they are trying to communicate. For example, if your pup barks when you come home after a long day at work, this could be their way of showing excitement and joy! Similarly, if they give you a big hug when you get home – well, let’s just say they were definitely missing you!

It’s also important to note that dogs may wink at other animals as well. If your pup is having trouble communicating with another animal, winking can be used as a form of communication. Similarly, if two dogs are already playing together, one might wink at the other as a sign of agreement or acceptance—a kind of silent communication between them!

It is also possible that dogs will use winks to communicate something else entirely—like excitement! If your pup seems particularly happy when they wink at you, then it could be because they are happy to see you or excited about playing together. Paying close attention to your pup’s body language can help you understand why they might be winking in any given situation.

How Can I Teach My Dog Not To Wink?

When it comes to teaching your pup not to wink, consistency is key! Start by praising him when he does not wink and ignoring him when he does (or even giving him a time-out). Make sure that everyone who interacts with him follows this same rule, so he understands exactly what is expected of him in different situations. Additionally, providing plenty of mental stimulation through interactive play and training sessions will help keep his mind occupied and prevent boredom-related behaviors such as winking from occurring in the first place! You can also consult with dog behaviorists to see if there are ways to reduce the winking if it is affecting a medical condition. But if your dog is not in pain or the winking isn’t bothering it, then you can let your dog do a cheeky wink every so often.

So There We Have It

Why do dogs wink? While the exact reason remains a mystery, understanding your pup’s body language and facial expressions can help provide insight into what they might be thinking or feeling in any given moment. Paying attention to these details can make all the difference when it comes to bonding with your pup and developing a strong relationship with them for years to come. So keep an eye out for those winks – who knows what secrets they may reveal!