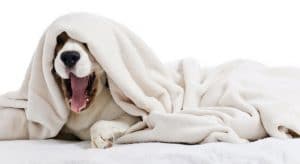 Does your dog to curl up at your feet – under your covers – when it’s time for bed? Does he run up to your room and dig his way into your freshly made bed, despite the fact that he has a perfectly sized, supportive, and extremely comfortable dog bed of his own?

A dog sleeping under the covers seems like a human thing to do. Many pet parents think it’s super adorable when their four-legged family members curl up under the blankets; however, others might find it irritating. Whether you fall into the former group or the latter, you’re probably wondering why your pup loves to snuggle up underneath your bedding. No, it’s not because he finds the smell of your fabric softener appealing (though that may make it more enticing). And it’s not just small breeds, like Jack Russell terriers, Shih Tzus, Pomeranians, West Highland White Terriers, or Beagles that like to do it; large breeds, such as German Shepherds, Dobermans, and even Mastiffs and Great Danes enjoy snuggling up under blankets, too!

Nobody knows exactly why dogs like to hide underneath covers; however, many veterinarians and dog experts have proposed some theories to explain this behavior. Below, we’ll share some of these theories so that you can gain an understanding as to why your pooch wraps himself up under blankets, quilts, sheets, comforters, or any other type of bed linen.

It’s no secret that canines have very strong instincts. Though they have been domesticated for thousands of years, they still hold onto the intuitions of their wild ancestors. In nature, dogs reside in dens, which provide them with protection and comfort from the elements. Their dens serve as a safe, warm, and secure environment. Your covers mimic the feeling that a den offers, so your pup feels safe, warm, and secure when he’s curled up underneath them; much like the safety and security that a dog crate or a dog house provides.

For some breeds, the instinct to seek shelter in a tight, warm space is stronger than others; for example, Dachshunds, Boston terriers, Scottish terriers and other canines that were bred to hunt small pray and traversed through underground tunnels to catch them, or built their dens underground. Other dogs, breeds, like the Husky and the Alaskan Malamute also love to burrow underneath covers because their wild ancestors dug holds into the snow to protect themselves from predators and keep themselves shielded from heavy falling, wind-driven snow.

This theory goes hand-in-hand with the den theory. Many experts believe that canines like to hide themselves underneath blankets and sheets because these materials cradle them, creating a swaddling sensation. Much like babies, dogs like to be swaddled, too. It creates a sense of warmth and protection that they find very comforting and soothing. If your furry friend likes to take shelter underneath your blankets, it’s likely that that he’ll also enjoy wearing a dog sweater for the same reason; it creates a swaddle like feeling that is calming. If your pup is prone to anxiety, he might find that burrowing underneath the covers offers a sense of comfort that soothes his anxiousness, too.

It’s no secret that canines are human kind’s best friend. They are loyal and will go to great lengths to make sure that they show their human companions how much they love them. To that end, some people believe that dogs like to hide underneath the covers – particularly with their two-legged counterparts – as a way to show them affection.

Dogs also view their people as their pack leaders, or “parents”. That means that they look to their masters for all of their basic needs. You fill their dog bowl up with the highly nutritious dog food they need to thrive; you offer them the interactive dog toys, puzzle toys for dogs, and automatic fetch machines to keep them active and entertained; you keep them well-groomed by bathing them with a high-quality dog shampoo, brushing out their coats with a durable dog brush, and use nail clippers for dogs to keep their nails neat and trim. And just like he offers you affection, your pooch also looks to you for affection. As such, it’s likely that he enjoys curling up underneath the covers when you are wrapped up in them, too, so that he can get some love and affection from his beloved human friend.

Lastly, another theory that has been proposed to explain why canines like curling up under blankets and sheets has to do with the fact that they are pack animals. Since dogs are so in-tune with the instincts of their wild ancestors, who slept tightly huddled with their pack member, they find that cozying up with their human pack members recreates that same feeling, and thus satisfies their instincts. Squishing up against you, your four-legged family member’s domestic pack leader, offers him the sense of security that he longs for.

If you’re worried that your dog will suffocate when he is curled up underneath the covers, don’t be! It is very unlikely that your pooch will smother himself when he’s wrapped up in your linens. Dogs can sense when they aren’t getting enough air and will adjust themselves if they feel as if they can’t breathe; however, it is always a wise idea to check on your pooch to make sure that he is safe and sound.

Tips to Remedy the Situation

If you’re concerned for the safety of your pooch – and yourself – there are ways that you can discourage him from wrapping himself up underneath the covers. Bring his dog bed into your bedroom and fill it with a few blankets that he can curl up in on his own. Use a dog treat as a way to encourage him to sleep in his bed, and offer treats as a reward when he does sleep in his own dedicated space. You could also keep his bed outside of your room and keep the door closed; however, you may have to deal with scratching and whimpering until he gets used to the idea that you would rather have him sleep in his own bed. 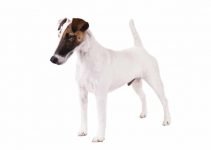 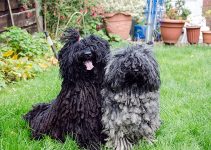 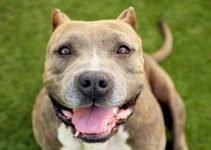 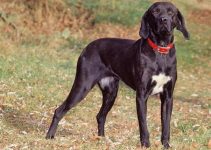 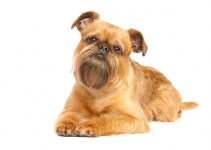 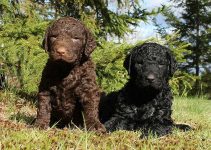