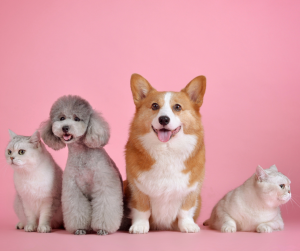 It’s natural for cat owners to wonder if their cats can get worms from other animals, especially dogs. The answer is yes—cats can indeed get worms from dogs. After all, cats and dogs often interact with each other, and it is possible for parasites to be transmitted between them. Fortunately, there are many ways to help keep your feline friend safe from worms and other parasites. Let’s learn more about the risk of worm transmission between cats and dogs.

Intestinal worms are parasites that live inside the host’s body and feed off of its nutrients. There are several types of worms that can infect indoor cats, adult cats, adult dogs, puppies, and kittens, including roundworms, hookworms, tapeworms, heartworms, and whipworms. These parasites can cause a variety of symptoms such as vomiting, diarrhea, lethargy, weight loss, and poor coat condition. If left untreated, worms can be fatal to cats in severe cases since the cat’s immune system becomes compromised and can’t fight off the parasite or the parasite eggs. This means that worms of any kind are a health risk to pet owners alike, and can cause issues with the small intestine and other parts of the body.

What Are The Most Common Types Of Worms In Pets?

In both cats and dogs, the two most common types of intestinal parasites are roundworms and tapeworms. Roundworms are typically transmitted through eggs in contaminated soil or prey animals, while tapeworms are usually contracted through fleas or ingestion of infected prey. Fortunately, there are treatments available for both types of worms in both cats and dogs. The best way to know if your cat is infected with parasitic worms is a pot-bellied appearance, hair loss, small egg-filled segments in cat feces, lethargy, loss of appetite, and abdominal pain.

Types of Worms That Can Be Transmitted Between Cats and Dogs

There are several types of worms that can be transmitted between cats and dogs, including roundworms, tapeworms, hookworms, whipworms, heartworms, and lungworms.

Roundworms are the most common type of worm found in both cats and dogs. In fact, most kittens are born with roundworm infections due to their mother passing these parasites on during pregnancy or while nursing her young. Roundworm eggs can also be found in soil and even ingested through contaminated food or water sources. They are usually contracted when a pet ingests eggs or larvae either through contaminated soil or another animal’s feces.

Tapeworms can also be contracted through contact with contaminated soil or another animal’s feces as well as through fleas or lice that have ingested infected larvae. Tapeworms are usually acquired by cats after eating an infected flea; however, it’s possible for them to pick up tapeworm eggs from contaminated soil or water sources as well. Tapeworms are internal parasites that latch onto the intestinal wall and feed off nutrients, causing the host to lose its appetite, lose weight, and become very sick.

Heartworm is a potentially deadly parasite that is spread by mosquitoes carrying the larvae from an infected animal to an uninfected one. Heartworm disease is generally considered more of a problem for dogs than for cats; however, there have been cases where cats have contracted this parasite from infected mosquitos as well as from other animals such as foxes and coyotes who carry the disease but don’t show symptoms themselves. Monthly heartworm preventives help keep your cat clear of parasitic infections on a regular basis. It also lowers the risk of infection and helps with disease control.

Cats are also prone to contracting lungworm, which is a disease caused by parasitic larvae that live in the lungs and airways of cats and dogs (as well as humans). Lungworm larvae are often ingested when a pet consumes contaminated food or water, but they can also be passed on through direct contact with another animal or even through licking contaminated surfaces.

The best way to prevent worm transmission between cats and dogs is to practice good hygiene habits such as regularly cleaning up after your pet, keeping them away from areas where other animals may have relieved themselves (such as parks), washing your hands thoroughly after handling them, and cleaning litter boxes regularly. Additionally, make sure you stay on top of regular deworming treatments for both cats and dogs—your veterinarian will likely recommend doing this at least once every few months depending on their lifestyle—and ensure that they stay current on flea/tick prevention treatments as well since these parasites can carry larvae which can cause infections in both pets if left untreated.

What Can I Do To Prevent My Cat From Getting Worms From My Dog?

The good news is that there are treatments available for all types of worms in cats and dogs. Most treatments involve taking medication orally or topically once every few weeks for several months until all signs of infection have disappeared. It’s important to keep in mind that these treatments must be given regularly for them to work effectively; if you miss a dose your pet could become reinfected.

The best way to prevent your cat from getting worms from your dog is by keeping them separated at all times—especially when they are outdoors. If you must let your pets outside together, make sure you’re monitoring them closely so that you can quickly intervene if any suspicious behavior arises. Additionally, make sure you regularly check both your cat and dog for signs of infection such as lethargy or vomiting, and take them for regular checkups with a veterinarian at least once a year for tests and deworming treatments as needed. Lastly, be sure to keep up with flea prevention for your cat as this is a primary route of transmission for tapeworms!

Worm infestations are a common problem among both cats and dogs but thankfully they are easily preventable with good hygiene practices like regular deworming treatments and flea/tick prevention measures. Additionally, it’s important to note that while it is possible for worms to be transmitted between cats and dogs via contact with contaminated soil or feces from other animals (including humans!), it is not very common for them to actually contract the infection this way unless the conditions are optimal for larvae survival (e.g., warm temperatures).

So while it pays to practice caution when allowing your pet(s) to interact with other animals outside of your home or yard, there’s no need to worry too much about worm transmission between your cat(s) and dog(s). If you have any further questions about how you can protect your pet against worm infections or need assistance treating a current issue then don’t hesitate to contact your veterinarian right away! They will be able to provide expert advice on how best to keep both you and your furry family members safe from harm.