Home
Dog Articles
Tibetan Terrier Dog Breed Information – All You Need to Know
This post contains affiliate links, and I will be compensated if you make a purchase after clicking on my links, at no cost to you. 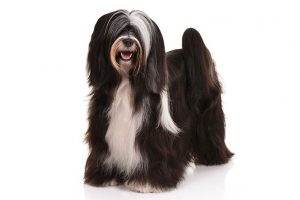 The Tibetan Terrier, often referred to as “The Holy Dog as Tibet,” is an ancient breed that was used as a watchdog in Buddhist monasteries. This loyal medium-sized dog is ranked 96th out of 193 breeds by the American Kennel Club.

As their name suggests, TTs come from the mountainous regions of Tibet. They worked as watchdogs for monasteries, and they also guarded tents and herded groups of nomadic people. They were never sold – instead, they were given as gifts in return for great favors. One such gift was given to a British doctor in India, who then acquired another TT and proceeded to breed them. The resulting dogs were, at the time, a nameless breed to the British, so they called them Tibetan Terriers. However, the TT is not actually related to the terrier family whatsoever.

CHARACTERISTICS OF THE TIBETAN TERRIER

Here is some information regarding the appearance and temperament of the Tibetan Terrier.

The Tibetan Terrier is medium-sized and square in proportion. They somewhat resemble their cousin the Lhasa Apso but are slightly larger, reaching up to 17 inches in height and up to 30 pounds in weight. They are surprisingly powerful, with large, flat, snowshoe-like feet that provide great traction. Their distinguishing feature is their large, gorgeous double-coat. The undercoat is soft and wooly, while the outer coat is long, fine, and profuse. The outer coat comes in a vast array of colors and patterns.

Their coats vary from soft to hard, and it is naturally resistant to most elements. As such, even though they possess a beautiful and profuse coat, they actually aren’t as difficult to keep up with as many people believe. Regular grooming is recommended for the TT, which has the added benefit of strengthening the bond between TT and owner and is a great training tool. Many TT owners end up loving grooming their dogs.

Tibetan Terriers are brave, loyal, and sensitive. They are intelligent and affectionate, sweet and gentle. They are a very fun breed and are surprisingly agile. This is a dog bred for snow; as such, they are remarkably powerful and have great endurance. They are great with children, but they are best suited for homes with school-aged children who know how to behave properly around a small-to-medium dog. TTs do well with other dogs and pets, particularly if they are raised with them. Their average lifespan is 14-15 years.

Because they were bred to be watchdogs, they can fulfill that role quite nicely, raising alarm when they see anything strange. However, their bark is very deep and siren-like, which can become problematic if not trained early on. Teach your dog when it’s appropriate to bark and you will be able to better control it. If allowed to run the show, you will find that your TT will exhibit more alpha-like behaviors, such as excessive barking, dominance and aggression issues towards other dogs, and reservation around strangers. Be sure to establish yourself as the leader to prevent these sorts of issues. TTs can also be prone to separation anxiety if they believe they are the pack leader.

CARING FOR A TIBETAN TERRIER

The Tibetan Terrier, like any breed, has some specific requirements to maintain a happy and healthy life. Here is some additional information about their nutrition, exercise, training, and health needs.

Tibetan Terriers historically came from nomadic groups who experienced both feast and famine regularly. As such, they developed some specific eating habits. It’s not unusual for a TT to leave a lot of food behind in their bowl, as they tend to only eat when hungry. This was meant to help maintain their lean, efficient bodies, and because they were often eating leftover gruel from their owners. Feed them a good, clean food with real ingredients – dry dog foods can work well, as will raw food diets. Just keep in mind that your TT will eat when and however much he wants.

TTs love the outdoors. They enjoy spending time outside with their families, either on walks or playing in the yard. They don’t generally require a huge amount of exercise, although it does vary between individual dogs in a litter; work with your breeder to identify which dog’s energy level best fits your lifestyle. Generally, a nice walk outside will be plenty for your Tibetan Terrier. Some will enjoy things like strenuous hikes or brisk jogs, while others will prefer a quick walk and then laze around the house.

Tibetan Terriers also enjoy hanging out in the house in a spot that’s higher up, like on a staircase that has a view through the window, so they can perform their instinctual watchdog duties. Also, when properly exercised, they can make for great apartment dogs.

The Tibetan Terrier is a smart dog and fast learner. They are independent, though, and repetition will start to bore them. They also do not respond well to harsh training methods; as with any breed, positive reinforcement is always the recommended method of training. Start them early on in puppy and obedience classes and socialization to ensure your dog is a well-mannered member of the household. TTs also love performing activities with their families, and they take well to clicker training and dog sports like obedience, rally, agility, and nosework. Any activity where they can strengthen the bond with their humans is welcome.

Tibetan Terriers are a very hardy, healthy breed, owing to their history as nomads in harsh conditions. But just like any dog, they are prone to certain health issues. Work with a reputable breeder to test for common genetic diseases such as hip dysplasia, thyroid issues, allergies, and similar issues. Tibetan Terriers can also be very flea sensitive, so always be wary when outdoors. Flea Collars and other treatments are recommended.

Tibetan Terriers can be prone to joint issues when spayed or neutered too early. They age gracefully, but they can also be prone to geriatric heart murmurs and cancer. Be aware of the symptoms for these health problems so you can recognize them early and care for your dog accordingly. 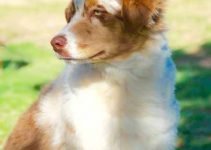 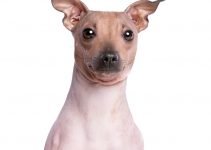 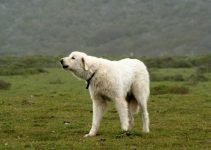